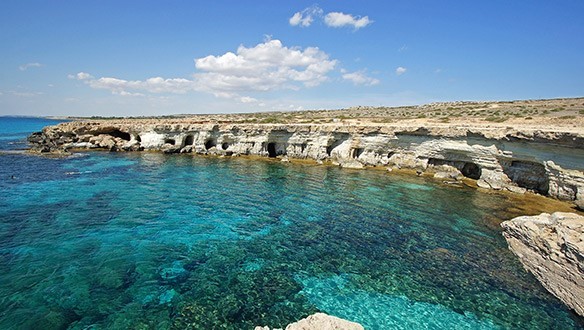 Having visited Cyprus about 20 times through different seasons, some might say I am obsessed, but I believe this is testament to the fact that the tiny island lives up to its slogan of “The Year-Round Island.” Whether it is crystal clear waters, mountain walks, historic sites or amazing local cuisine you are after, you can find it all, plus more in Cyprus.

I have been lucky enough to stay in several different parts of Cyprus and I personally believe that you cannot beat the beaches found in Protaras and the surrounding area. Famous for its protected nature park at Cape Greco, you will often see both locals and tourists alike leaping off the cliffs into the sea. As a child we used to travel on a local fisherman’s boat to Cape Greco, where he would stop and serve us halloumi cheese and watermelon – you don’t get more Greek than that! He even gave us bread and told us to put it in our mouth and get in the sea, within seconds I could see why, as fish all swarmed around us eating the bread from our mouths.

For those who want to stay nearer to the airport, Larnaca is a great option and a popular tourist destination, the sea is not as clear as in Protaras but the beaches are still popular – Cyprus beaches have been voted the cleanest in the world! A famous beach in the area is Mackenzie Beach, which is so close to the airport you are able to see the planes flying really low as they come into land…it is not quite Maho Beach in St.Martaan but it is still exciting! Another popular beach and the main one in Larnaca is Finikoudes, which runs along the main promenade. Also in the Larnaca region you will find the Hala Sultan Tekke Mosque. It stands out from the rest of the landscape like a mirage against the famous Salt Lake, where in the winter months you can see flamingos as they come here to breed.

If you are going on holiday to escape the daily grind then Paphos is a great choice, served by Paphos airport, it is easy to reach. It is here in Paphos that you can visit the birthplace of Aphrodite, known locally as Petra tou Romiou. There is a local legend that if you swim around the rock three times you will meet the love of your life, but the sea here is not as calm as other places and I do not recommend doing it. As well as exquisite hotels and striking scenery there are also several ancient historic sites to see such as the Tomb of the Kings, which is a UNESCO World Heritage Site (the whole city is in fact on the UNESCO World Cultural Heritage list). This is a site that should not be missed if you are staying in the area.

Another area in Cyprus extremely popular with tourists throughout the summer season is Limassol. With a long main strip lined with hotels, restaurants, chic beach bars and a newly built shopping mall and marina tourists will not be bored! A short drive from Limassol is the famous ancient site of the Kourion. It is a large open-air amphitheatre which is on a hill offering outstanding views and some incredibly well-preserved mosaics – they still use the amphitheatre to put on plays during the warmer months.

As you can see Cyprus is a perfect summer holiday destination, but as the Cyprus Tourism Organisation suggests it is a “year round island.” In the cooler months, the capital city is a great place to visit, steeped in both ancient and more recent history. The old city of Nicosia is a charming place with many family run restaurants and small bars that have a great atmosphere whether you are a local or just visiting.

Another popular destination during the cooler months is the mountain region of Troodos. In the middle of winter, it is possible to ski here and I have been stood in snow up to my waist in the higher parts of this mountain range in the past. Kakopetria which is a small village further down the mountain is a great place to go if you want to see the true Cypriot way of life. There are local women sat outside their houses selling everything from hand woven lace to pots of homemade jam - it’s a scene which could have been lifted straight off a postcard. With the stone buildings, cobbled streets and streams running through the lush greenery, it is a charming place that will really make you feel like you are experiencing the village way of life.

For all the hospitality of the local people, the world-renowned cuisine, the unique history and the sheer diversity of this island, it would be hard to come away feeling underwhelmed. With such an abundance of activities, all the family will enjoy a holiday to Cyprus, whether they want to relax on a beach, delve into a rich and profound history at ancient sites or indulge in world-class food and drink.